Wandering around the cliffs of the Zavial Battery, one can stumble upon Site Mirador, an intimate space of contemplation and a landmark
within the Mediterranean landscape that celebrates the existing ruins.

The proposal for the Site Mirador aims to reconnect the existing fragmentary ruins with the non-existing Fortress in a new whole by restoring
tangibly their causal and visual relationship. For this reason, their built Triptych is recreated as a sequence of open to nature spaces: the “new
Fortress” watching the sea horizon, the Zavial Battery guarding the “new Fortress”, and its supporting Barracks being on the Zavial Battery’s
guard. In particular, the ruins are perceived as exhibits, an inseparable part of the landscape, therefore complementary concrete structures are
added as a parallel enhancing experience. The new structures seek to complement and highlight the beautiful poetics of abandonment of the
existing ruins; thus, their axes and color palette are accordingly defined. In addition, they carry engraved information about the ruins’ history;
consequently, each space becomes the Info Point of itself. In the collapsed Fortress’s cliff, a geometric sphere is placed to symbolically represent
its past presence and importance, providing a different type of isolated meditation.

From the existing main access path, one observes an elongated Tower which acts as a landmark and invites him to further explore the space; the
first existing building envelope reached is that of the Barracks. Having approached, one can take a ramp which unfolds around the monument,
and descend into its core: a slow ritual transition from the landscape to an underground secluded space, almost archetypical in its cave-like
form. As the user descends, the monument further unfolds as a continuous exhibit that can be observed and admired from all sides. While
underground, one is reunited with the natural ground and a water pond; the reflections in the water evoke feelings and, in a way, deceive time.
This semi-roofed space offers protection from the natural phenomena and privacy for contemplation. On the wall a Site plan is engraved for one
to comprehend the Site Mirador in its entirety: the Zavial Fortress that was built as part of the coastal defensive strategy and collapsed in 1755
never to be rebuilt again, as well as the Zavial Battery and supporting small Barracks which were built near the Fortress remains to enhance the
defensive coastal front. From within the Barracks, one can also take a glance at the Zavial Battery and the turbulent ocean through the Tower
that has a Periscope inside; a glimpse to better understand the –carved on the concrete wall- history of the Site Mirador. When exiting the
Barracks, the user ascends a ramp to find himself following an interconnecting path between the Zavial Battery and its supporting Barracks. The
Zavial Battery is now a cubic roofed observatory, the Mirador. ?he overhanging concrete structure “embraces” the existing monument leaving
just an horizontal opening to frame the sea horizon and the sphere at the collapsed Fortress’s cliff. The sphere consists part of the built Triptych
mainly visually, as a landscape monumental object to remind the visitor of its past importance: a “new Fortress” framed and constantly observed
from the Zavial Battery, as without it in the first place, no Zavial Battery ruins would exist today.

Overall, the user entering the Site Mirador can freely discover the space on his own based on his temperament, perception, and intuition, or
follow the “signs” inside and in-between the monuments. By exploring, reading, and observing, one can understand the history of the place,
wander, contemplate, and dream. This is our goal for Site Mirador: to learn from the past, live the present, and envision the future. 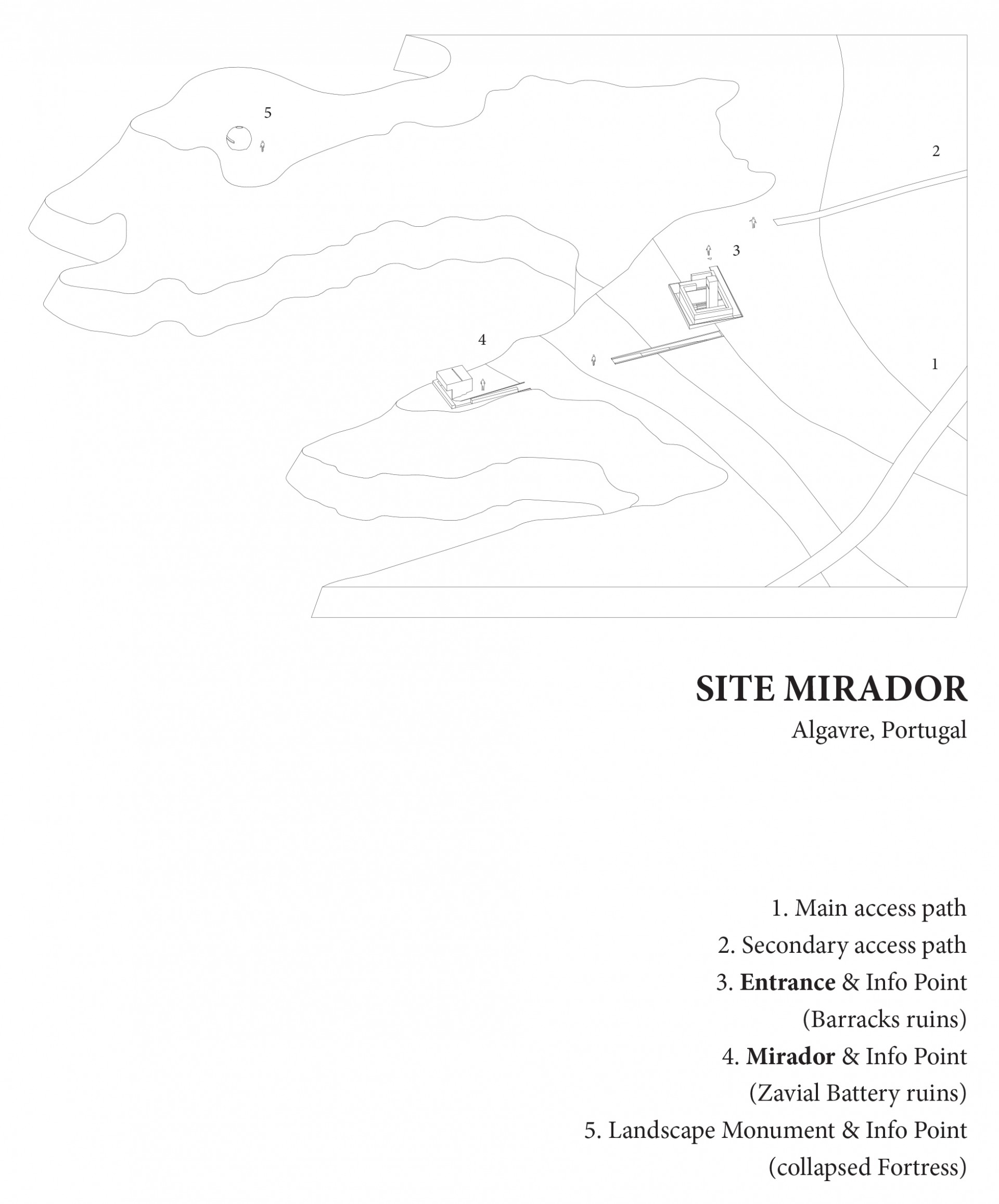 Axonometric view of the ruins ensemble