The project RiverBANK is an integrated system of productive agro-based network that lend spaces to community for growing food (at the river-side site and in the city).

The main design is at the river edge where the sloppy terrain is re-structured into terraced spaces for the community to grow food. The primary and secondary trail network is designed through the entire bank and different blocks are divided into zones for the cultivation of different types of food. This entire food zone is supported through an array of radical infrastructures designed for different species integral to creating an ecosystem of resilience and natural practices. These products/services derived from the RiverBANK can be exchanged through community currency and bartered across the city to fulfill the daily requirements of people.

If not the entire supply of food, a small percentage can be met through this agro-based development. Many marginal and lower-income groups can have access to healthy food and nutrition. The riverbank creates a productive food flow network into the city by utilizing under-utilized land and making resources available in close proximity.

View of the RiverBANK 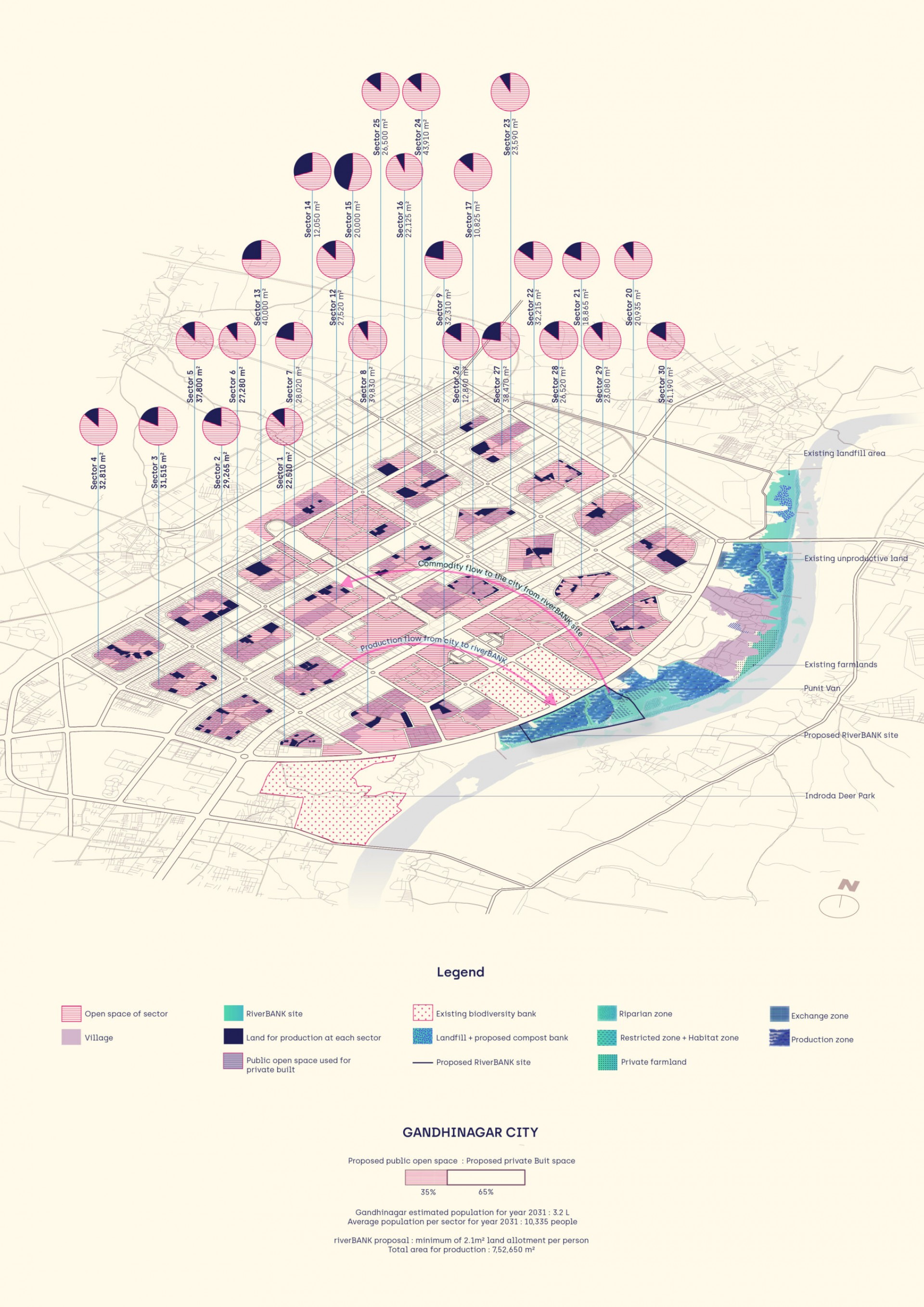 XL Strategy Plan : The RiverBANK system and the city The bank of Sabarmati is a huge open land with abundant biodiversity and varying slopes. A lot of land is available as public open land which is currently Unproductive with the infestation of invasive flora species across the whole site. It is disconnected and abandoned from the city of Gandhinagar where instead it should be the core of the city due to its location at the J road and the proximity to Punit van, Sarita park, and Indrora deer park. Gandhinagar is sparsely populated with an expected count of 3.2L people for the year 2031. Considering that, the city also lacks resilient social infrastructures and a sense of community. The food supply of the city is met through the agricultural farmlands outside the city which thereby is responsible for the condition of the local economy derived from the dependency on the global forces. Thus, the city needs more local control and decision-making power on the economic, social, and environmental conditions to improve the quality of life and induce self-reliance. The XL plan shows the ratio of the proposed public spaces in the city to the proposed private built. Up to 35% of the land is allotted as public. The idea of RiverBank at the city scale is to provide land allotments to people in their respective sectors where they can generate their own food production and further it be either consumed or taken to the riverbank where the riverBANK becomes the core of this barter system of exchange. A minimum of 2.1 m2 per person is allotted to every citizen of Gandhinagar and additional land area could be used for production at the riverbank site or around the city through pooling. 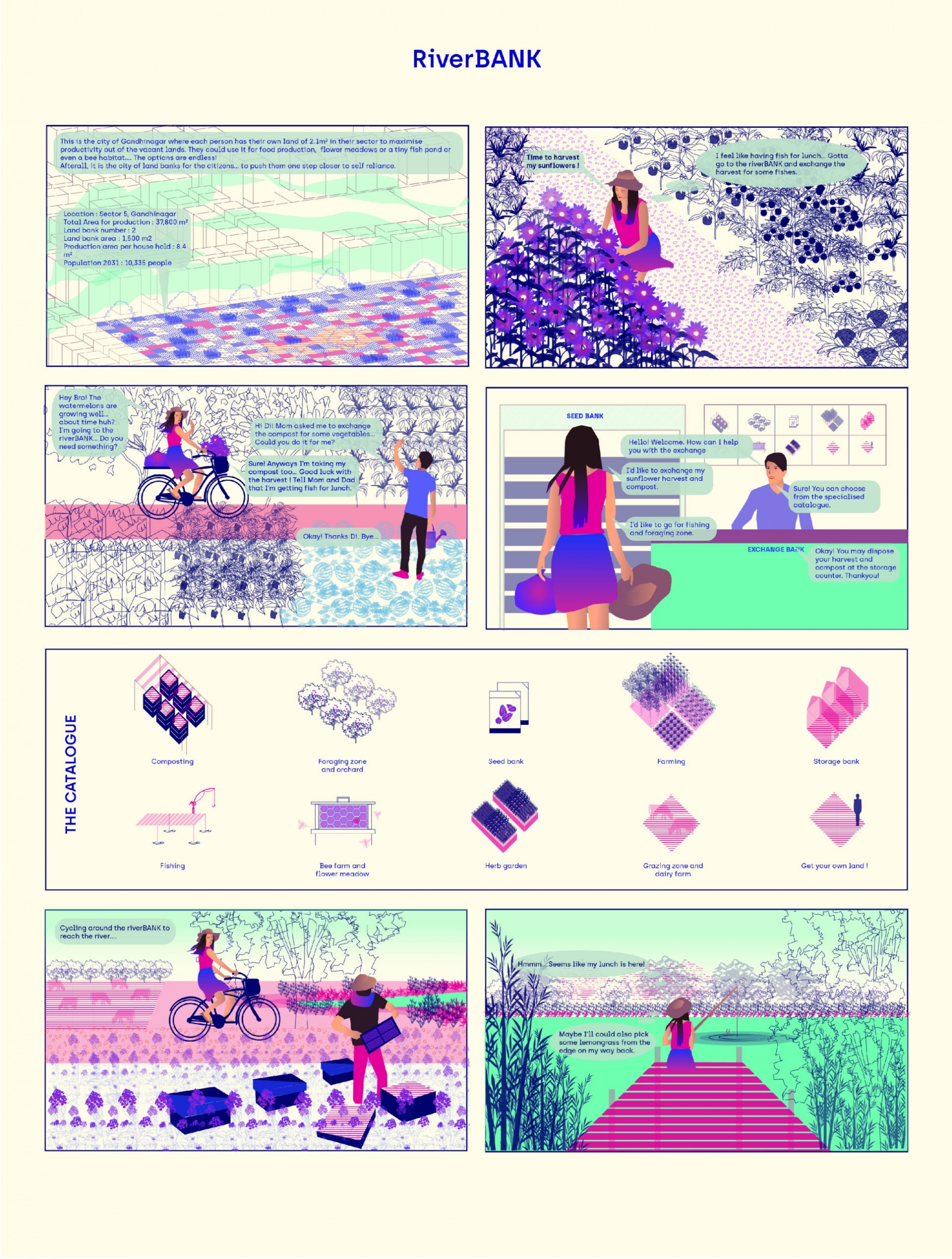 The Experiential Comic of RiverBANK The comic imagines how a Gandhinagar resident’s daily life would fit in with the RiverBANK system. Moreover, the system is described as a flow of production from the city to the RiverBANK site and the flow of commodities to the city from the RiverBANK. 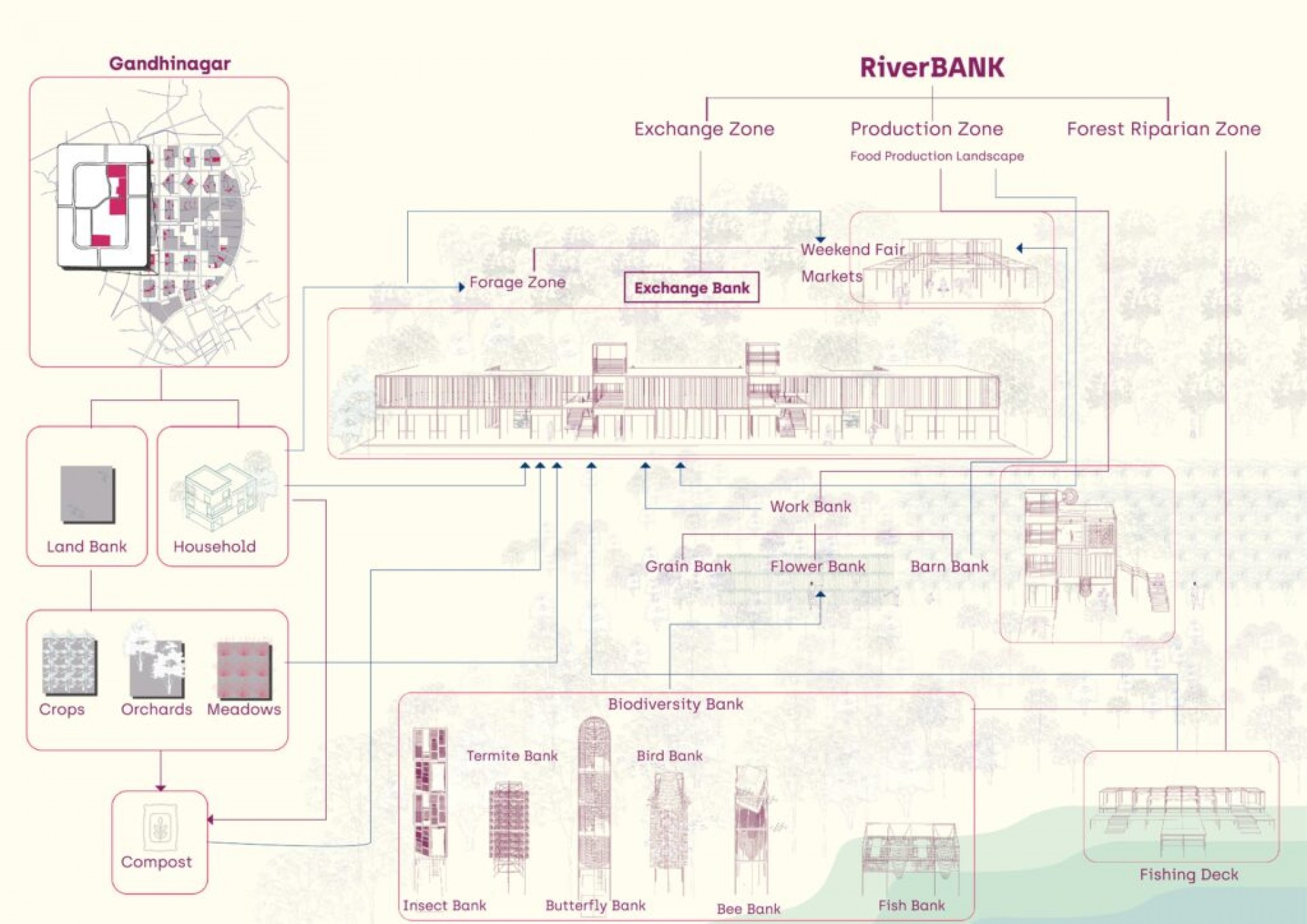 Concept Diagram and Design Development The people can pool and get their land allotments in the RiverBANK site for the production of their choice. The whole site is divided into three zones namely the Upland Exchange zone, Midland Production zone, and Lowland Riparian Forest Zone. The exchange zone becomes the hotspot of social interaction as the produce from the city’s land banks as well as from the Production zone is exchanged here. The Concept diagram depicts how the entire system is linked together. 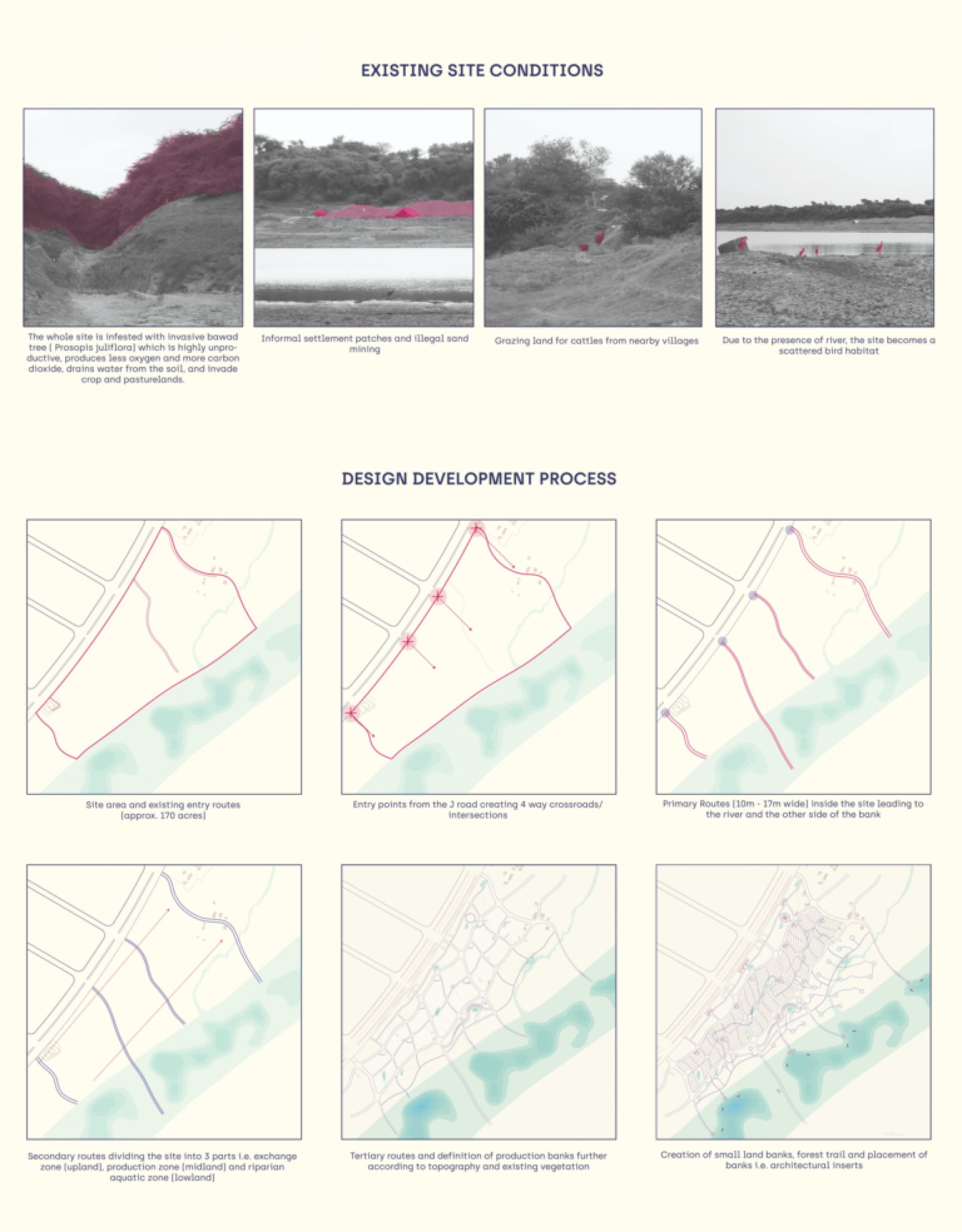 Existing Site conditions and design development of the RiverBANK. These are the key reasons for introducing the riverBANK concept and design. Since the land is public yet inaccessible and unproductive, it has a lot of scopes to make use of it and generate revenue, a system of exchange, and a sense of self-reliance. 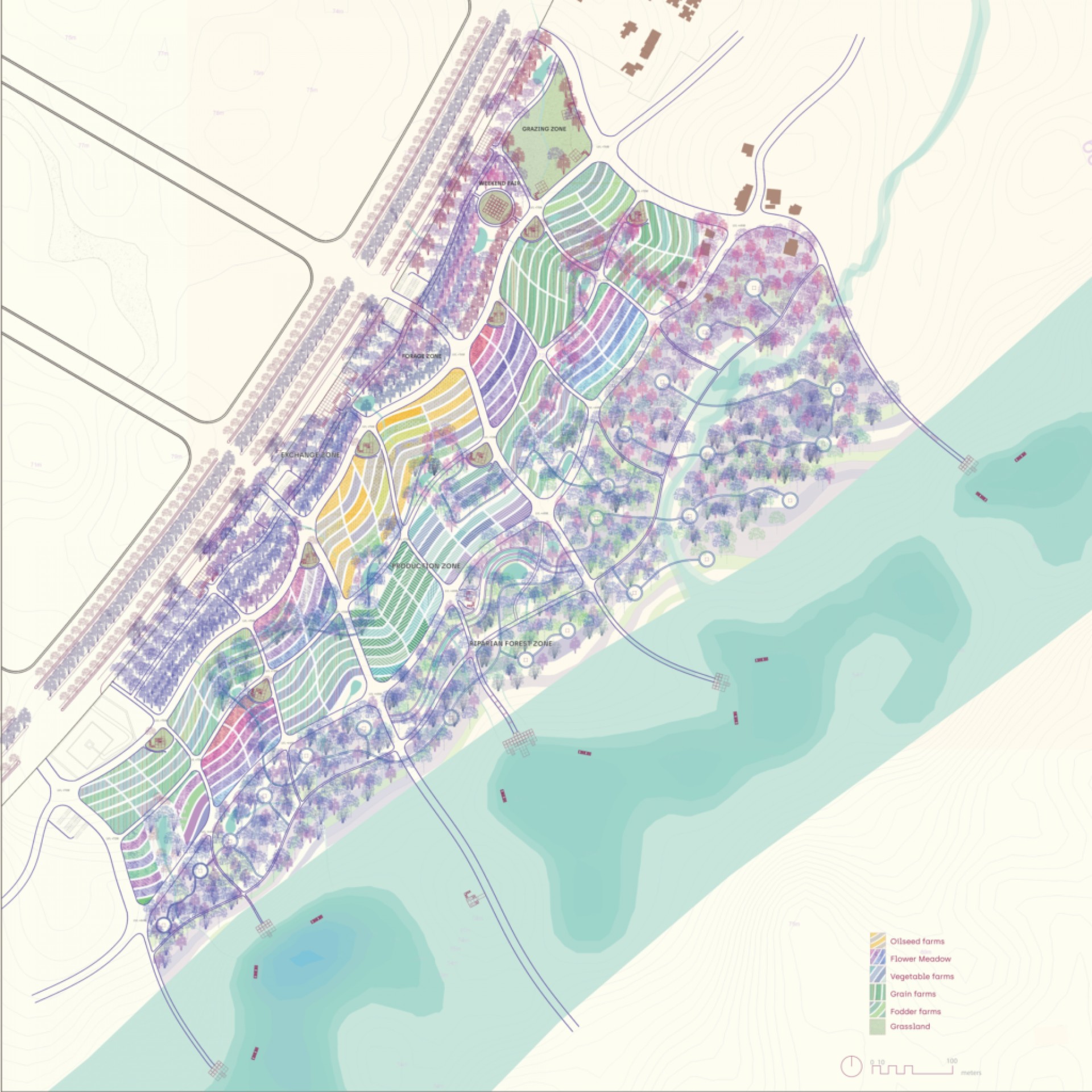 Proposed L Scale Plan Proposed L SCALE PLAN – The 85m wide J road and the street edge (10m wide) has been designed to accommodate traffic as well as to make it a lively edge for the three exchange banks to work. This exchange zone becomes the place of maximum footfall. The production zone has a series of land banks used for different food production connected with networks of 1.5m wide tertiary trails. The work banks are situated at uniform intervals to support the production. The meandering forest trail and the riparian forest zone have the existing preserved forest and the biodiversity support banks.

SECTION – The section has been cut across the whole site starting from the J road to the river. It shows the varying landscape from forage zone, stepped farms to the riparian forest. Zoomed-in sections of the architectural inserts i.e. the banks have been detailed out. 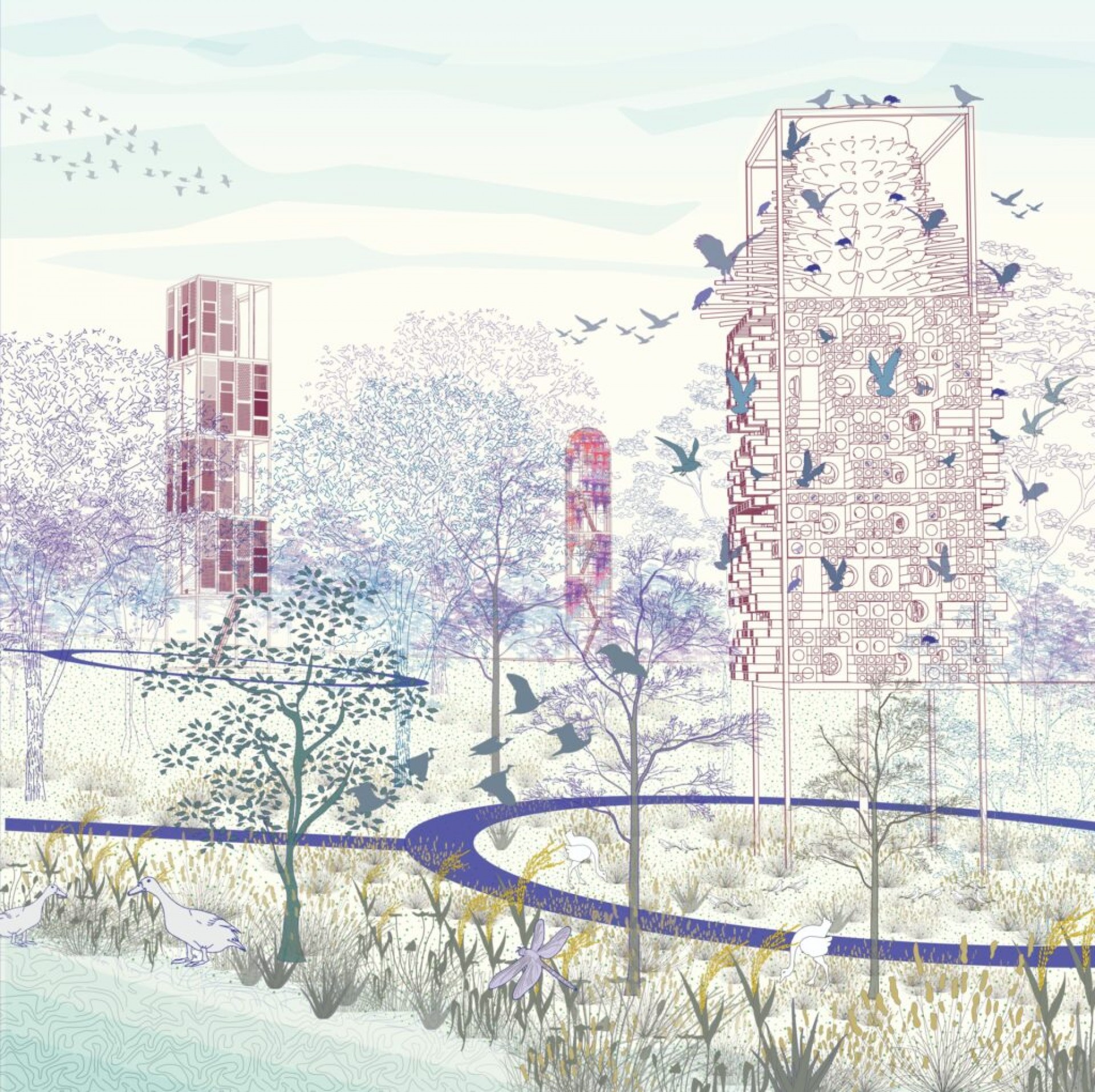 View of the Biodiversity Banks in the Riparian Forest Zone. The view consists of the Bird Bank (right), the insect Bank (left) and the Butterfly Bank (centre). The skin of the infrastructures have been designed to support the fauna and act as their habitat.