The green hill is my interpretation of the near future service station. It seeks to respond to the site’s and users’ needs in a relevant and impactful way while taking into consideration our climate crisis.

After researching in depth the site's social and political context I decided to serve the people and the motorway. I focused on offering drivers an escape from the road, powering the vehicles in a greener way and reconnecting the divided landscape and the people living in the area.

This resulted in a mixed-used building with: a power plant which generates electricity from biomass (sourced within a radius of 8km from the site), a recreational green hill which forms the roof of the building and offers a place for users to move, play and connect with nature, a gathering space which encourages the local community to interact and have meaningful conversations, an exhibition space where educational events about waste and our climate crisis can be held, working hubs where people from diverse professions can share ideas while working remotely, a fitness centre to improve the health and lifestyle of drivers and other users and finally, a restaurant where healthy local 'imperfect' produce (not up to supermarkets' standards) is served while users can visually engage with the powerplant beneath them.

The architecture celebrates the structure and processes that run the building itself with transparency. There is a desire to reveal and exhibit the elements which support the green hill and make the building operate efficiently: the steel superstructure, the machinery, the cores, the services... 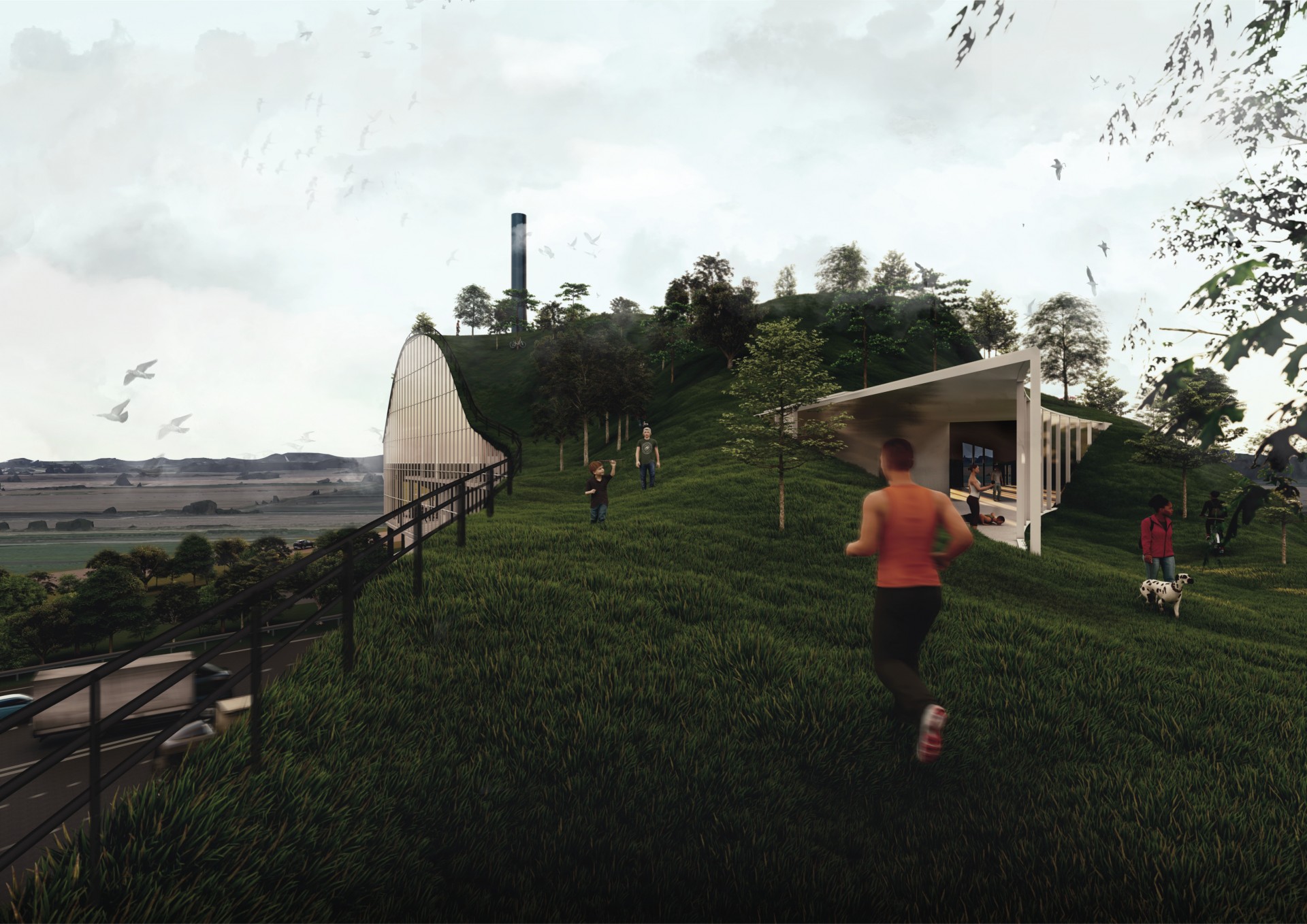 Nature meets Infrastructure. The Green Hill results of the relationship between users, the building, the motorway and the surrounding landscape. 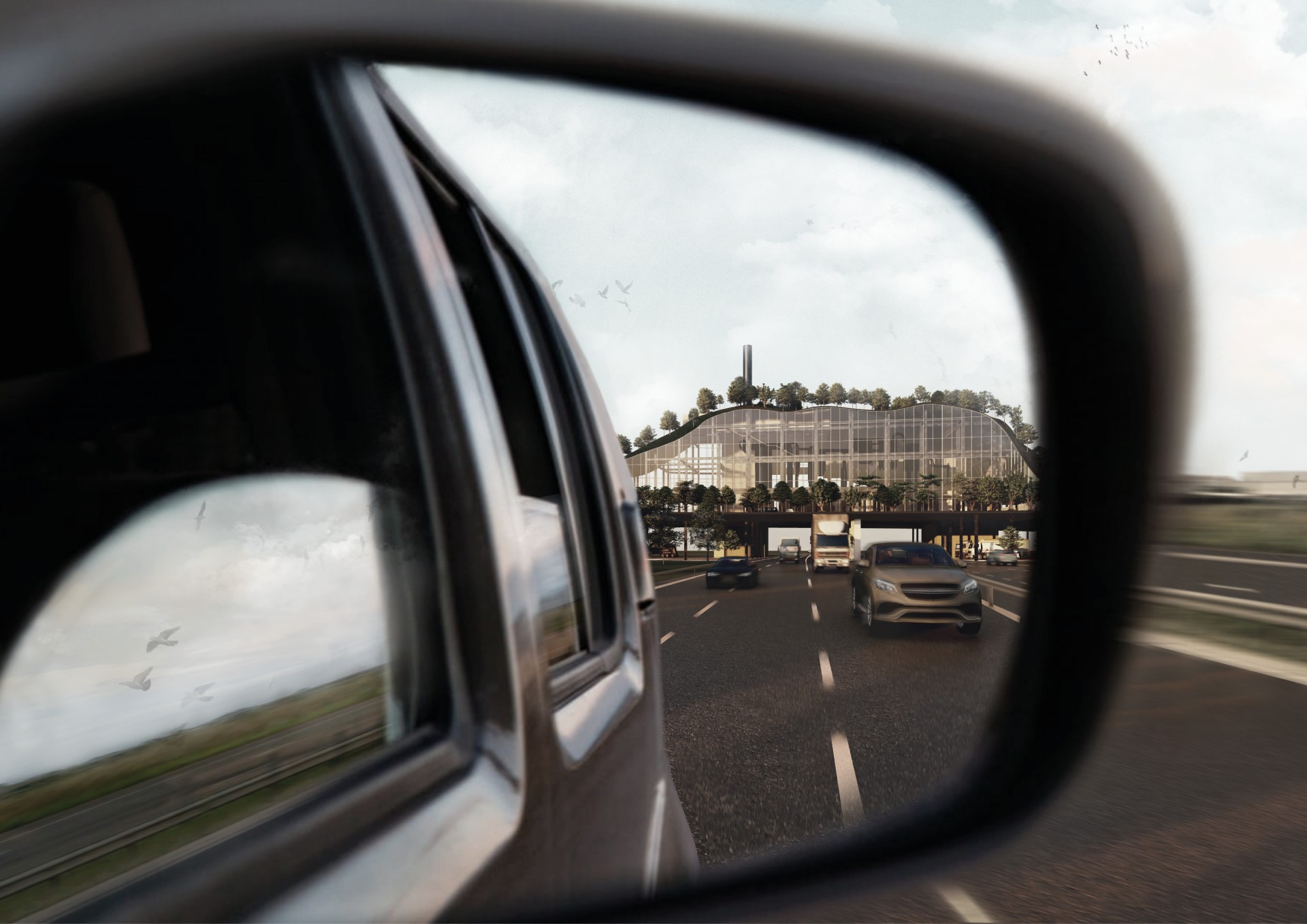 This image shows the view of the mixed-use M58 service station from the motorway. 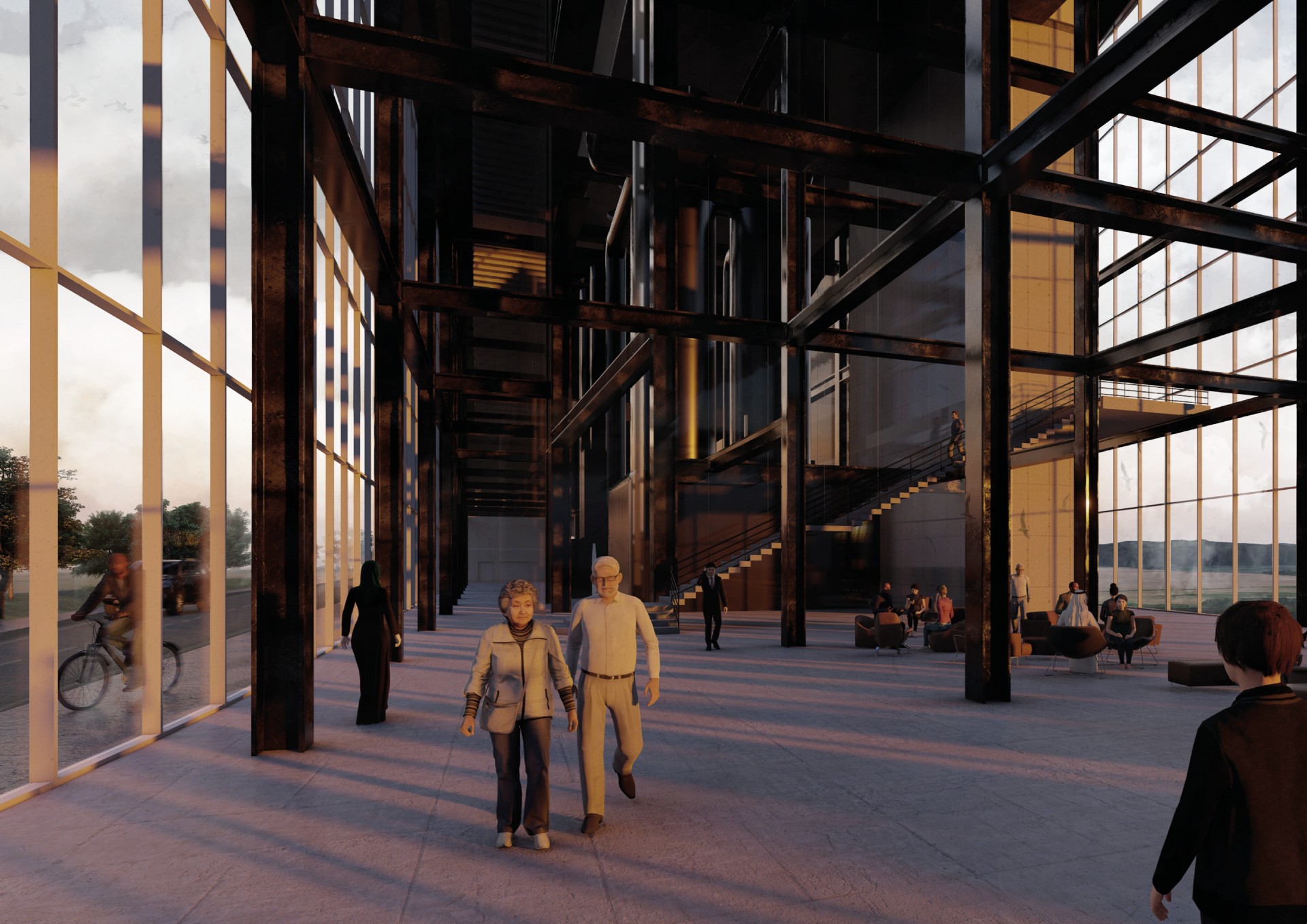 This image captures the view users have as they enter the building. It shows the important place the structure and the machinery have and the atmosphere these create in juxtaposition with the light façade. 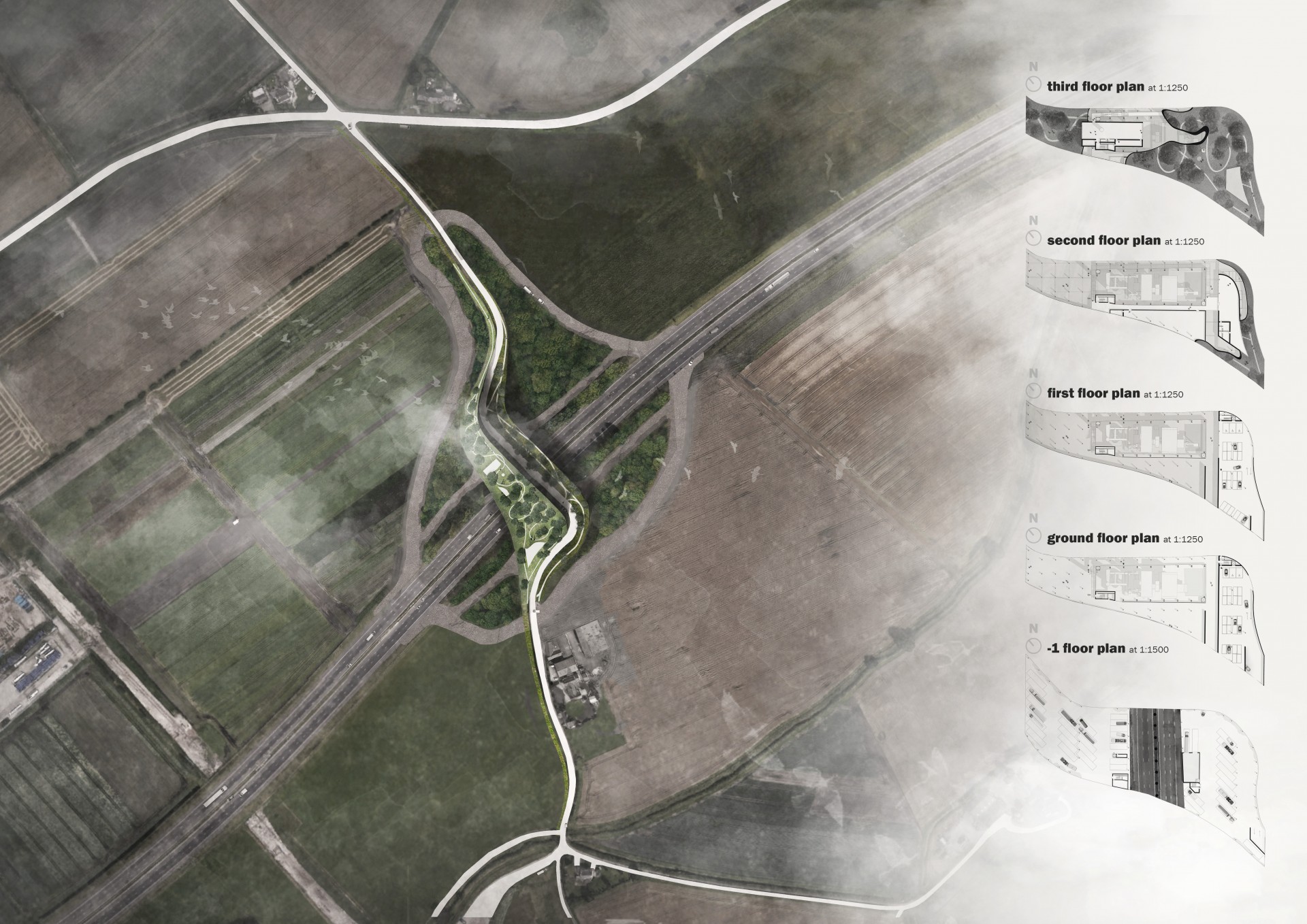 The building sits on top of the motorway and provides an opportunity for users to connect, interact with nature and take a break from the motorway. 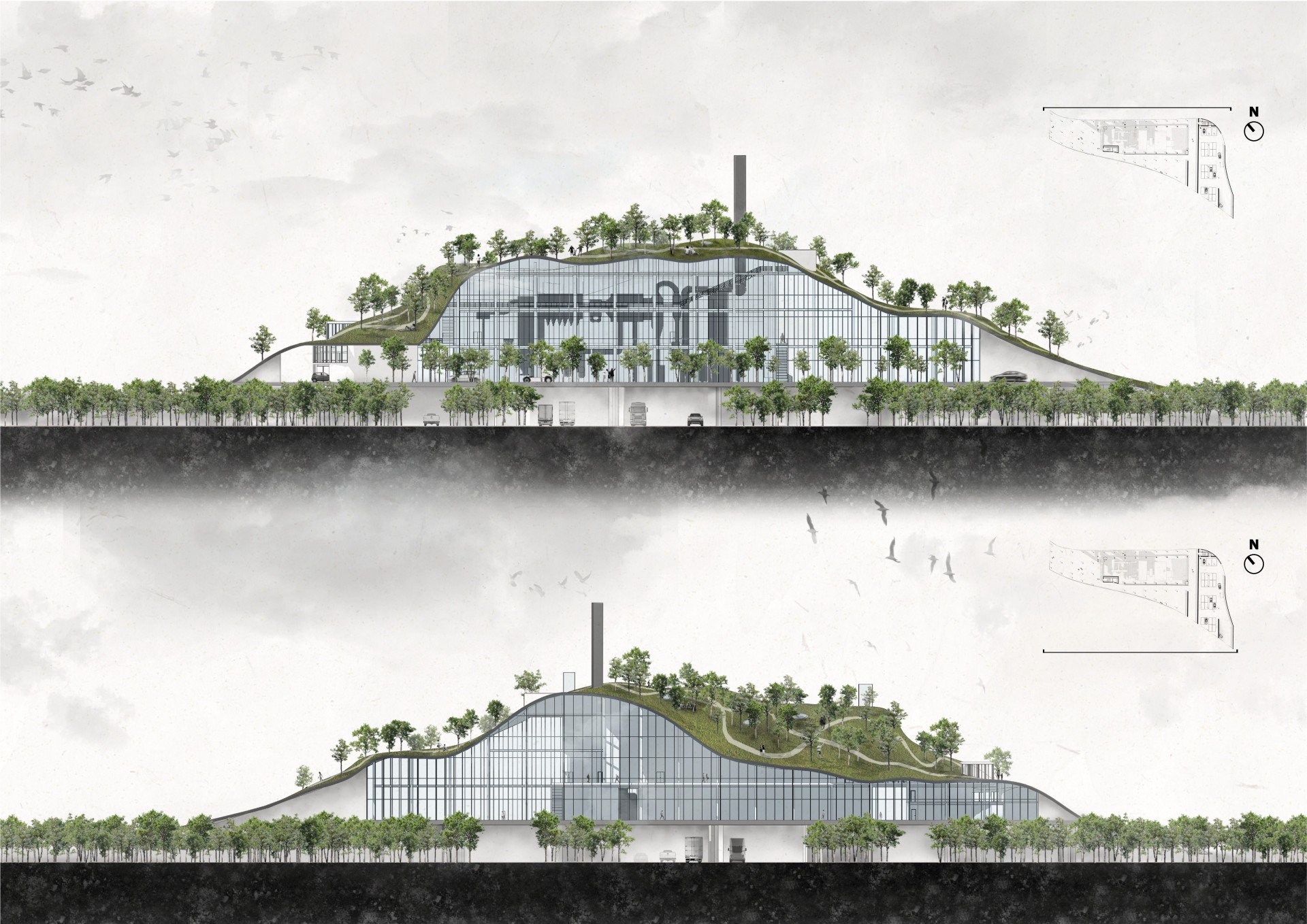 These elevations show the relationship between the motorway, the surrounding roads, the envelope of the building and its interior. The glass façade allows the machinery to be seen from the motorway. 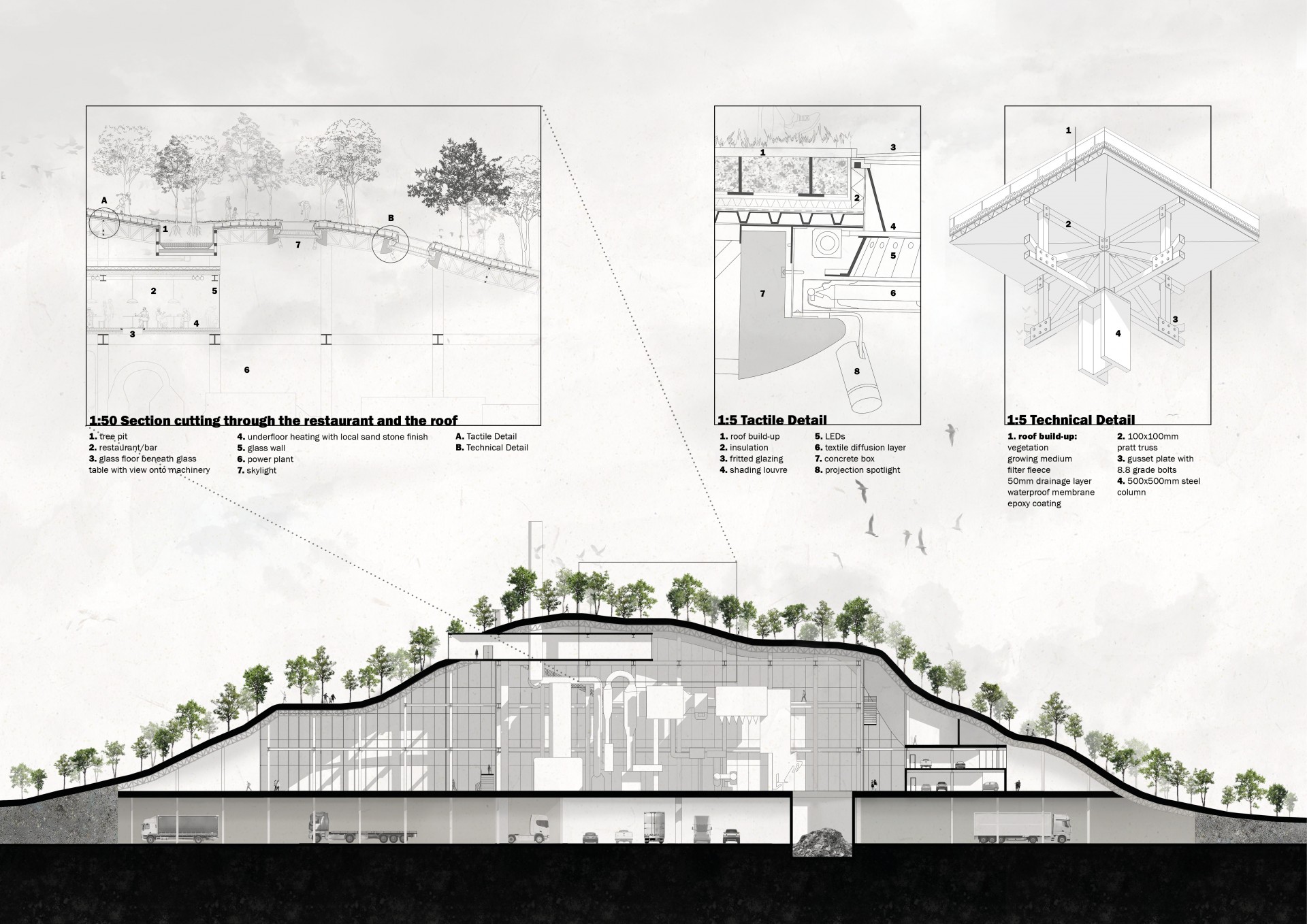 This section and details illustrate the intricate relationship between interior and exterior. 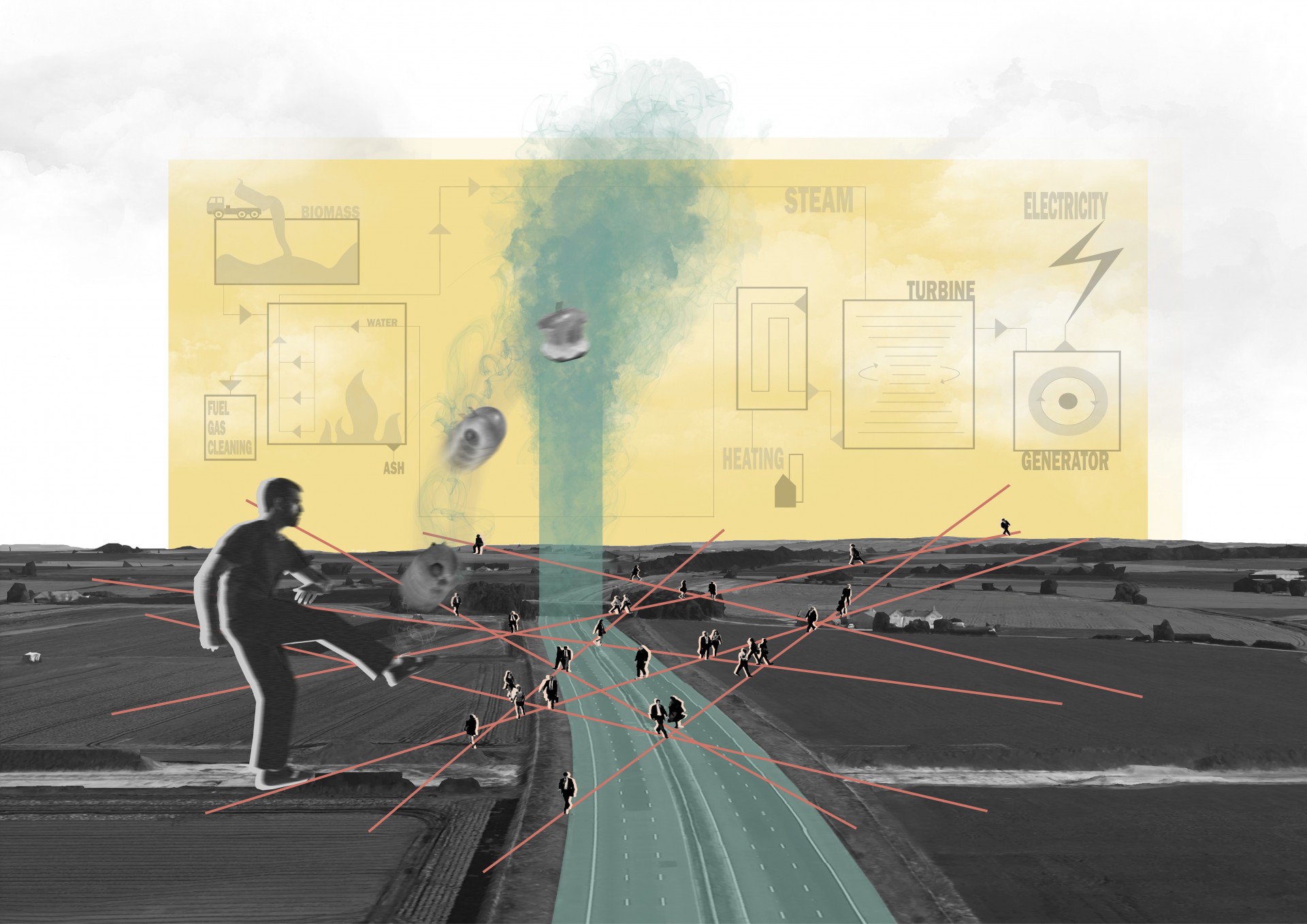 The power station uses domestic and agricultural waste from the houses and land within 8km radius of the site to generate electricity which powers the M58 motorway. 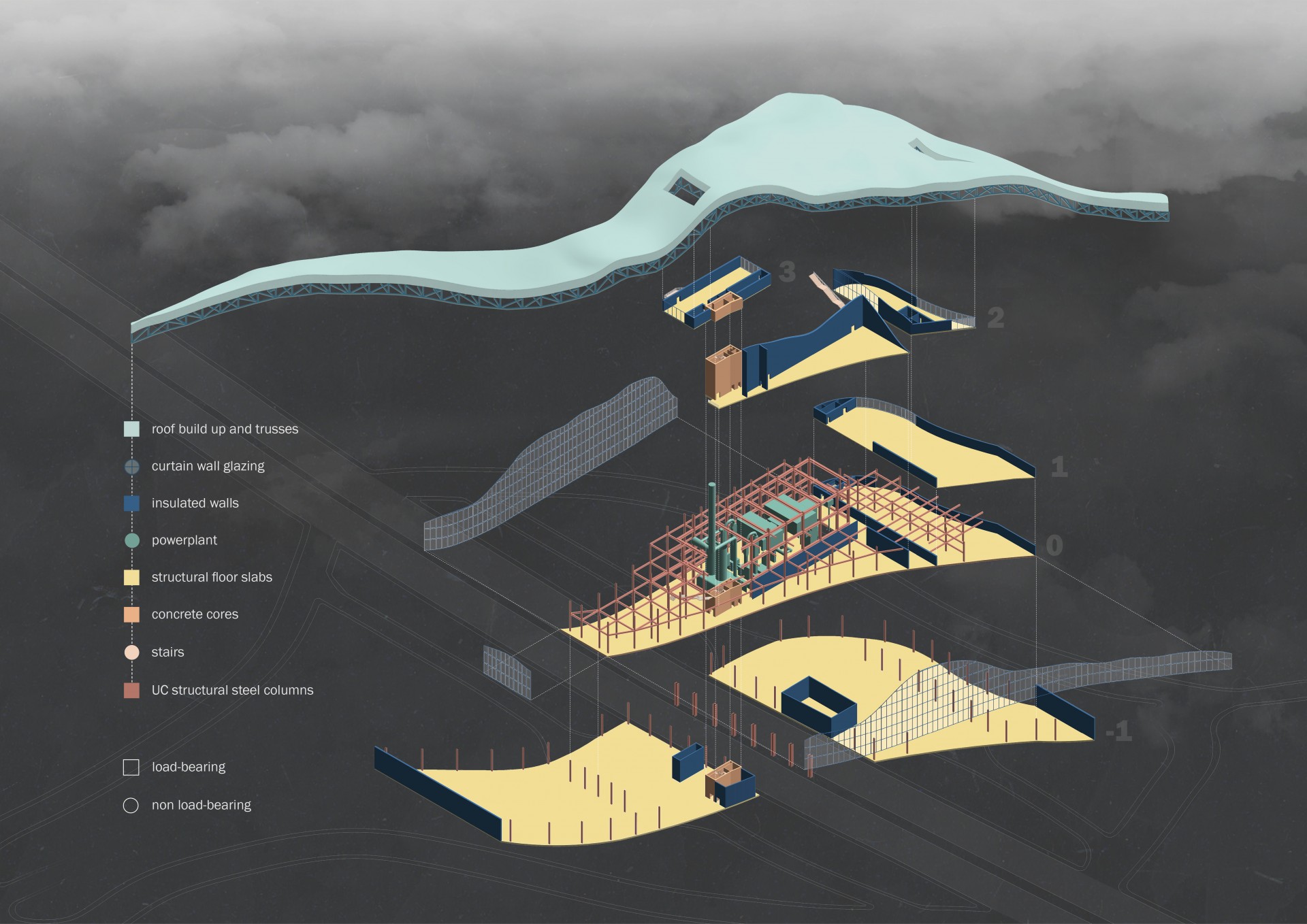 This exploded axonometric reveals the structure and mechanisms of the building. The steel structure is not only architecturally celebrated by being exposed but it also works as a resilient grid adaptable to future changes. 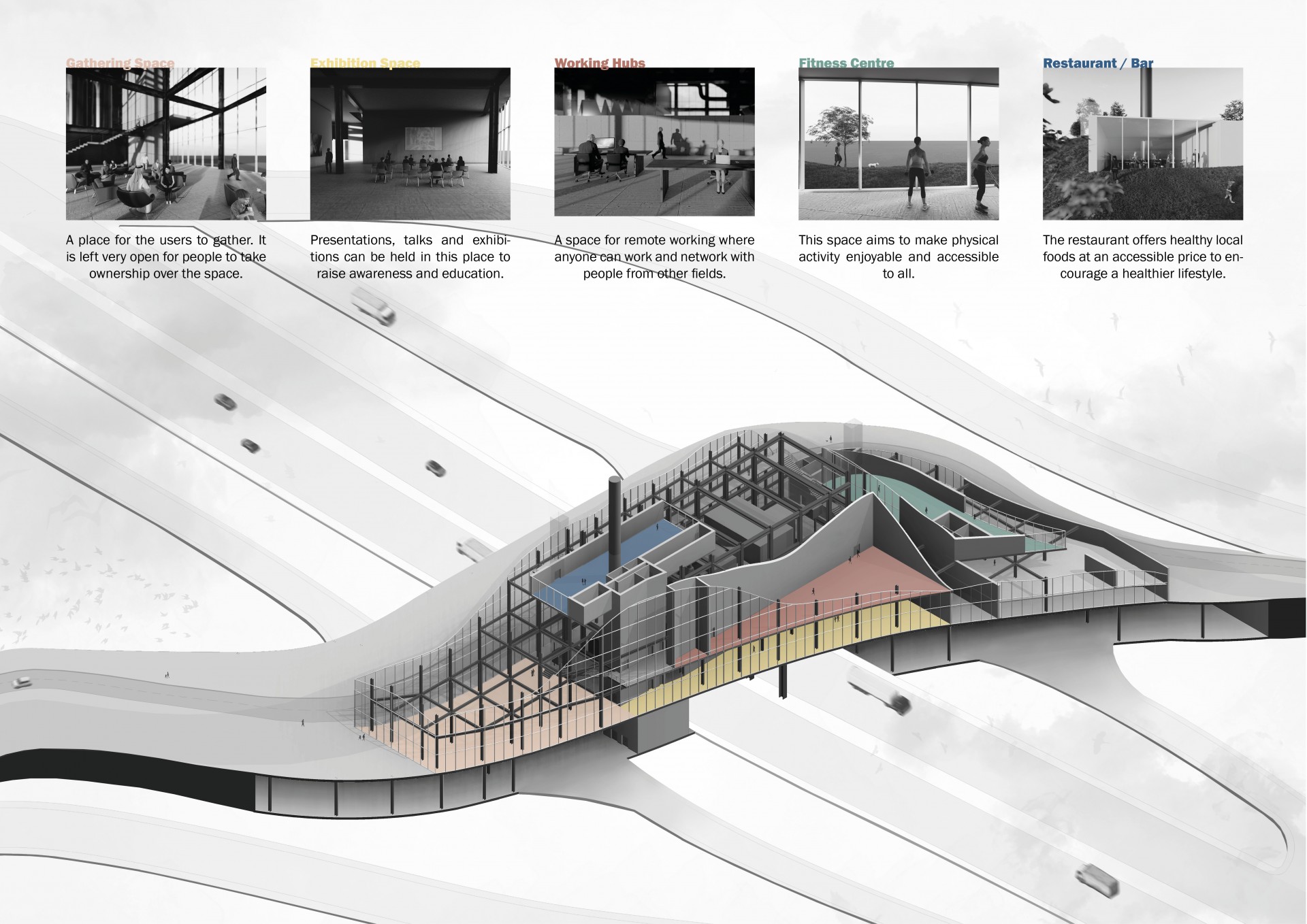 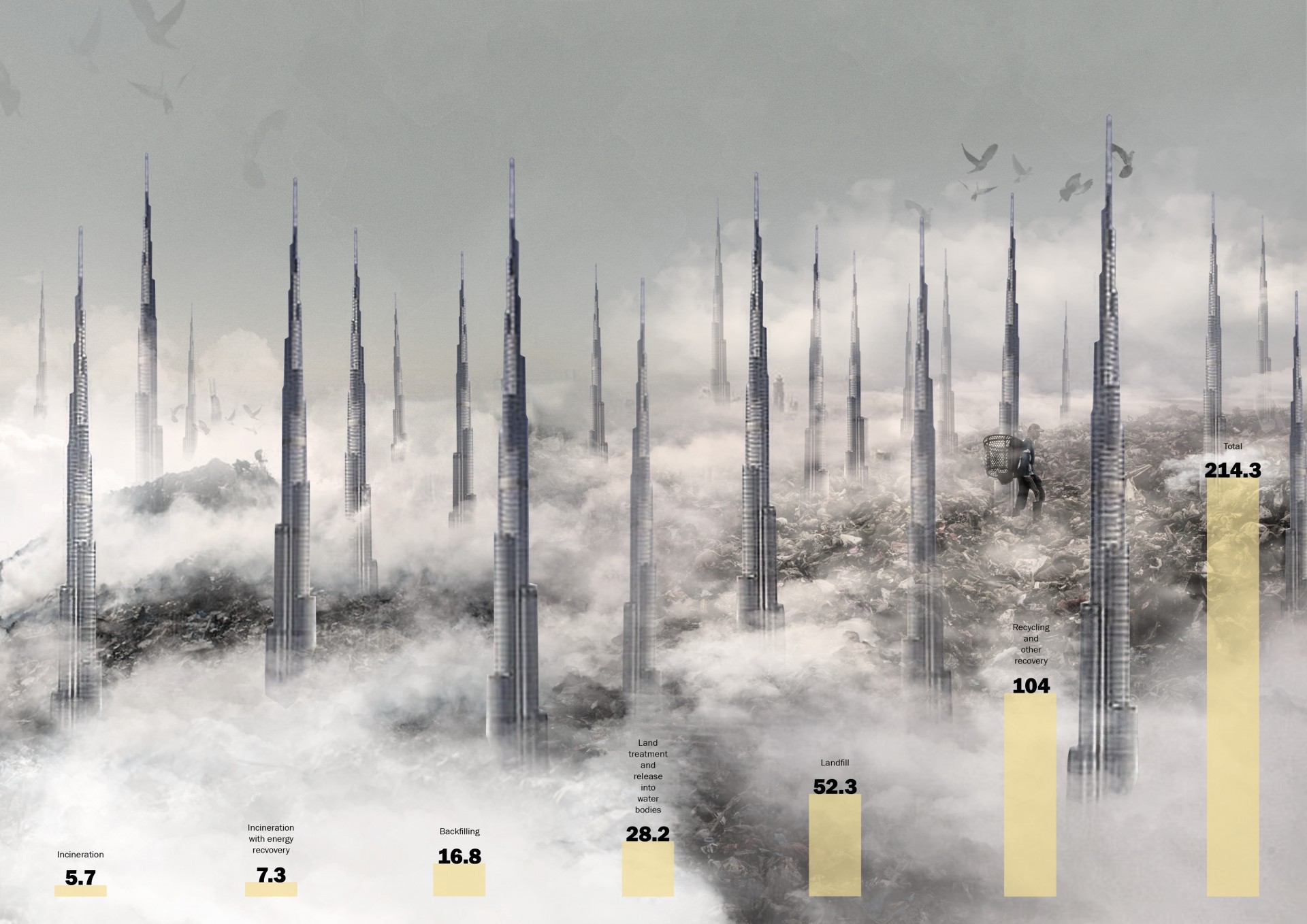 The UK produces the equivalent of 24 Burj Khalifas of waste per year (2019 figures in million tonnes on image). About half of it is recycled and nearly a quarter ends up in landfills. As the construction industry is the No.1 consumer of global raw materials it should also actively attempt to deal with the waste it produces.